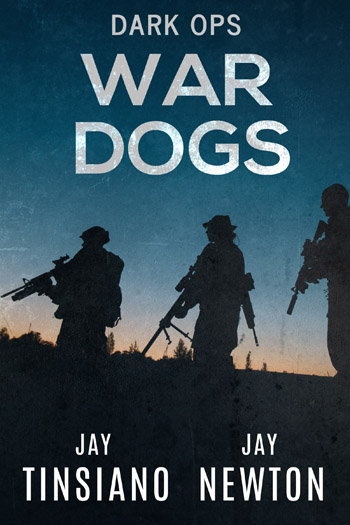 War Dogs, the second instalment of the Dark Ops mini-series is now available for Pre-order on Amazon Kindle, Apple iBooks, Kobo, Nook and others.

Here’s the description with a snippet from the story below.

As Ghost 13 begin to operate inside Iran, ex-SEALS Lieutenant Commander, Kurt Coleman comes up against an adversary that jolts him back to his first G13 op on the Syrian border. That experience left a bitter taste but the high-risk close combat missions are only just beginning.

No return. There was a date that Coleman would never forget—the date of no return. No getting away from the darkness in his mind. He remembered every detail of that day down to the smell, the fear, the taste of evil. Some of the things they were asked to do had to be compartmentalized in his head. Boxes to be locked away, never to be opened. It went without saying that emotions had to be flattened out over the years of service. These gigs had no front seats for feelings.

In those early days, Coleman had indeed followed orders without question. Now, he wasn’t sure what government he was working for. Funny, those days seemed so distant. How naive he must have been.

Now, there was no doubt. They had sworn allegiance to the Baphomet, the symbol sewn onto their uniforms.

On that first deployment, they had donned the standard garb of any number of rogue fighters in the Middle East. Unshaven, ragged shirts, keffiyehs covering their faces, olive green combat trousers. The early morning sun began to rise, promising a relentless heat that would bear down on them without mercy.

Coleman recalled the six names from the list Stark had given him; he had read their detailed files, but it was much too brief an assessment of each soldier. Naturally, Harry Dubicki, a Lieutenant from his SEAL platoon, now First Lieutenant in the G13COMM order, had joined them. A squat bulldog of a man hailing from Brooklyn with the attitude to match—the only guy Coleman had fought with in the field and the only guy he felt he could trust. The others were just names, along with their service records; Specialist Aaron ‘Fisch’ Fischer from Utah, Corporal Jack Wellman, Master Sergeant Mike Conner and Specialist Mickey Green, another fellow SEAL who Coleman had only met once.

However, everyone had plenty of mission experience between them in their previous roles—that was something. The remaining soldiers who had to stay at G13G5 Command, were, of course, unhappy about being excluded but they’d get over it. Besides, Coleman had a feeling their chance would come.

They had flown overnight to HAS22 Air Base in Iraq, been given the brief and loaded up their vehicles with gear and headed towards Syria.

Stark had positioned himself at the top of the hill where he had stayed all night, scanning the bleached out valleys and crossroads below. At the nearest junction, an abandoned truck, parked off the road, had been packed with C4 and primed for detonation.

The rest of the men had been hunkered down in an abandoned shepherd’s hut, the only place that promised shade from the ascending sun. It was positioned just behind the crest of the hill that overlooked the Syrian border from Iraq.

The Syrian Army convoy was due to pass in thirty minutes when Coleman, covering their six from the Iraqi side, spotted a cloud of dust on the road behind them.

He refocused on the approaching vehicle. It was a US marine Humvee, coming towards them and the border from behind their position. What the hell were they doing here? Command was supposed to mark the area as a no-go for at least forty-eight hours. They must be lost and off-course. Or just a bunch of idiots.

Coleman spoke into the radio mic hidden under his shirt.

“Wolf Four. We have friendlies heading to our AO. Get them out.”

A moment later, Wolf Four came back on the radio. “That’s a negative. They are not responding. Will keep trying, wait out.”

Coleman continued to watch the Humvee head in their direction with no sign of stopping, like a hound that had seen a rabbit.

Were they lost? Maybe their GPS was down and had they forgotten how to read maps?

Coleman sighed and spoke into the radio.

“Big Wolf. This is Wolf One. Sighted vehicle, approaching South East. Identified as a US marine patrol. They have not responded to radio calls. Over.”

“Keep position and eyes locked on target. I’m coming over. Get all other units on standby and concealed.”

It needled away at Coleman as he changed freqs and ordered his men to get themselves behind the rocks and out of sight. The patrol would surely investigate the truck if they saw it. Coleman checked his watch. According to their intelligence, the Syrian Army convoy was due in around twenty-five minutes.

Coleman turned and heard a shuffling of sand as Stark belly crawled up to his position. He held up his binoculars and surveyed the approaching vehicle as it moved around the bottom of their hill. As it came in sight of the ambush truck, the Humvee stopped.

From their positions, the men watched the Humvee, aiming at the doors.

Coleman knew the Marines inside would be assessing all the potential dangers. The soldier at the gun turret focused on the truck with his binoculars. The back doors on either side opened, and two Marines jumped down onto the dusty ground with their weapons raised in the high port position.

Through his binos, Coleman switched his attention to the long road to his left that stretched out up over a ridge on the horizon. He spotted movement, thinking for a moment it was a heat shimmer. Then realized it was dust, kicked up from several vehicles. The Syrian troop convoy would be over the ridge and within sight of the gathering party below in less than fifteen minutes.

He nudged Stark and pointed into the distance.

Stark looked for a few seconds and then handed the binos back, his face an expressionless mask before checking his M4 assault rifle.

Stark grabbed his arm, surprising Coleman with his speed.

Coleman stared at him for a moment and pulled his arm away. He spoke into the radio.

“Wolf Five. Get down there and tell them to get out of here.”